Events will be published here, once things get back to normal.

Come and Join us at the next event we are attending  !!

If anyone knows of any other venues that we may be able to attend or you would like us to appear at
your event, then please get in touch with our event organizer, who will gladly assist you.
Please email - office@networksoutheast.org

Report & photos by Dave East.
The stand made its visit to the Mid Norfolk railway at Derham for their diesel gala during the 1st to 3rd April 2016
This year the Railway had managed to arrange a visit from the prototype HST power car and 3 matching MK3 coaches. Funny how preservation moves on!
This alone would have guaranteed a good foot fall but the railway also managed to arrange for not just one but three class 50s to visit. One of which was in NSE livery! The whole weekend was a great success, not just for the railway
​ but also for the Society with many questions about the Society, 1753 and the up & coming Finmere event.
Thanks to Ian Shepherd, William Riddihough, Rob Bray and John Zabernik for their help at this event.

Report & photos by Dave East.
The following weekend the car was re packed and the stand made its way up the A1 to the Nene Valley Railway at Wansford on the 8th - 10th April2016.  The HST power car had stopped of at the Railway plus
​some class 56 diesels a different class 50 and a couple of class 47’s.
One of these being 47 712 of which we produced a mug and members of the group came up and cleared us out of stock!
The weekend was a resounding success and once again we did excellent trade and picked up new members.
Thanks to John Shepherd, Stan Collett, Rob Bray and John Zabernik for their help at this event. 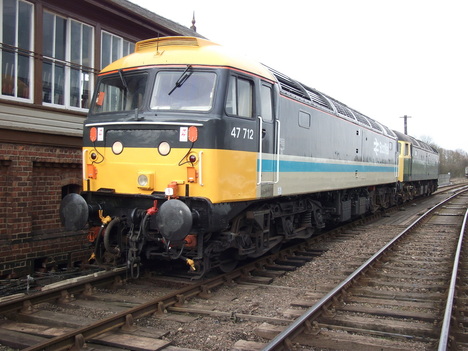 Report & photos by Dave East.
John Piper and Ian Shepherd set the stall at the Bluebell diesel gala on the 15th - 17th April 2016.
The event was arranged to mark 15 years of GB Railfreight and a selection of GBRf traction was in operations and once again a steady stream of visitors to the stall made a most successful weekend despite some dodgy weather.
Thanks to Chris Reavell for his help at this event.

Report & photos by Dave East.
Off to the Epping & Ongar spring diesel gala on Saturday the 23rd April 2016 we went!
Due to other commitments over the weekend Dave East and John Shepherd were only able to attend on the Saturday. The railway put on another good show with both their home fleet and a couple of visitors. This coupled with the usual heritage bus action on the connecting bus service made a most enjoyable event. 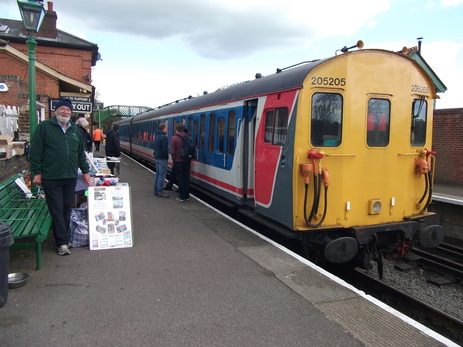 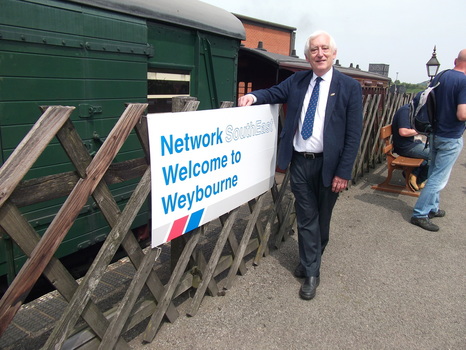 Chris Reavell.
Over the weekend of the 13th & 14th August 2016 the society staged their Network SouthEast Gala
event at Finmere Station to celebrate the 30th anniversary of NSE.

Celebrations started on the Saturday morning with a special & very appropriate naming of our Phase One 4CIG 1753  “Chris Green” - Hon President of NSERS. - (Managing Director of Scotrail, NSE & Intercity) during his career, Chris Green has been quoted as being one of the most dynamic railway managers in modern times.
1753 name was unveiled by the man himself in front of invited guests from the world of EMU preservation and supporters of NSERS. During the naming ceremony, society chairman Dave East revealed the intended refurbishment of 1753 back into NSE livery including glazing & bodywork repairs.
At 1200 midday, Finmere station was formally opened to the public by Chris Green via the Network SouthEast Railway Society’s new museum. This is a brand new information and education facility that can visit other preserved railways and special events. The museum was unveiled at Finmere as part of the event & as explained during the guided tour, completion works would be undertaken over the next few weeks.

Traction was provided with 1753 working in multiple with Coulsdon Old Vehicle Engineering Societys class 73 130, they gave rides along a short demonstration line. A nice touch was the NSE style window labels we had produced showing a pre-grouping route from Finmere to Brighton.
Special thanks must go to COVES members for allowing Finmere station to be given a full NSE make over by NSERS.   Period reproduction signs and original station furniture were in abundance with special attractions such as working iconic “clicker” clock and Solari departure board plus lots of bunting!

Thanks to the Epping & Ongar Railway, for lending their famous Capital Card “super car” (bus tube train).
Other attractions on site provided in conjunction with COVES were Bicester tractor club who provided
onsite displays & local tours.

In true NSE style was a classic NSE goodie bag for each visitor,
with balloons & colouring books reproduced from the time!
The whole event was a great success and thanks must go to all those who came and help this to be
the most successful Society event to date. Special thanks to Neil Bird and Sue Rose who spend many
sleepless hours with me in preparations. Also John Piper in his assistance in painting the
container and other countless Projects.

Our Finmere event coverage in press....

The event on the Saturday was captured by Paul Colbeck,
who look an amazing array photographs throughout.

A special album has been created which can be viewed here...

Report & photos by John Piper.
The society sales stand was at Eridge station for the Spa Valley Autumn diesel gala & beer festival over
a long weekend from Friday 21st October through to the Sunday.  Not only was there a great range of
traction in use there was a splendid array of beer & cider available at all three stations, & on the train,
jointly organised with the West Kent CAMRA branch.
Both of the society headboads were in use, the last time in the anniversary year for the NSE 30 one, & the society is most grateful to the railway for allowing the sales stand & the headboards to visit the line. 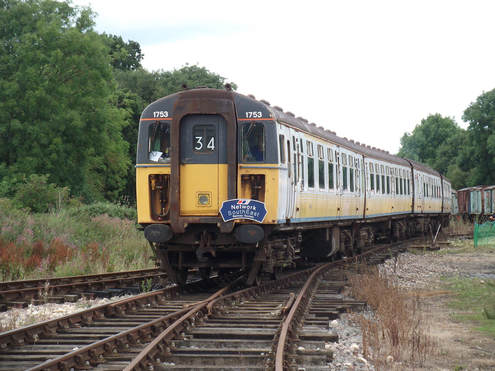 The event started with a special clearing of the new platform starting signal which was recovered from the route through Berwick on the line between Brighton and Eastbourne. A route 1753 has worked and may have stopped at in her time!
Visitors were able to inspect the now complete mobile museum that was unveiled last year and also see the work that has been undertaken to reinstate the declassified first class compartments of 1753 which include re strung luggage racks together with a replacement widow panel to replace the graffiti ones that the unit suffered towards the end of its operating carrier.
Chris Green, The Society Hon. President and man behind Network SouthEast visited on the Sunday and was able to assist in some of the work before taking the controls of the train that carries his name.
The whole weekend was a great success and a BIG thank you must go to all members and friends who came and help with the preparations and running the event.